"What do you mean, I have two birthdays?"

A month after I returned from Paris, I flew to Miami to interview Ricardo, Anna’s older brother (my grandfather’s nephew). Ricardo was born just after the war, although when, and where exactly, seemed to be something of a mystery. “Ask him about his birthdays,” my mother suggested, before I left. “Birthday…S?” “Yeah. He has two of them.”

“So when exactly were you born?” I asked, as Ricardo and I sat down to dinner at his Coral Gables apartment. Ricardo smiled. “Well, if you’d asked me 15 years ago,” he said, his voice thick with a Portuguese accent, “I’d have told you I was born on August 15th, 1946, just after we immigrated to Brazil.” Until he was 50 years old, Ricardo said, he celebrated an August birthday, and toted a Brazilian birth certificate. “But then, not long before my mother died, I discovered this.” He slid a photograph across the table for me to see:

Halina coming off the boat that brought her (with little Ricardo) from Naples to Rio in June of 1946 (over a month before Ricardo’s “Brazilian” birthday); my grandmother, Caroline, to her right

“It’s my mother coming off the boat that brought the family to Rio—and she’s holding ME!” Ricardo’s eyebrows shot up. My grandmother, on the right, had given birth just days earlier to my aunt, Kathleen. “I always thought Kathleen was older than me…although I did find it strange how much bigger I looked in our baby pictures!” Ricardo said, chuckling. 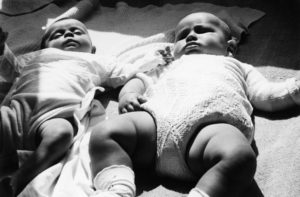 Ricardo’s real birthday is February 1st, 1946. He was born in Naples, Italy. Halina, apparently, had decided her son would be better off leaving his European roots behind. “Your father had just lost half his family,” she explained. “We knew we were never going back to Poland.'” Why hadn’t his mother told him this sooner, Ricardo wanted to know? Halina’s response, he said, was: “What’s the difference?” Ricardo shrugged. “My horoscope, I suppose,” he said, laughing.

Ricardo jokes about it now, but at the time, I realized, there was nothing lighthearted about Halina’s decision to take her son’s fate into her own hands—to create a life story that she felt would protect him. Living in Poland had almost cost them their lives. She and Adam held no attachment to Poland as their homeland—what had their country done to protect them during the war?

Ricardo and Halina near Leme beach in Rio de Janeiro

My evening with Ricardo was unforgettable. Unearthing the story behind his two birthdays was just the beginning. Ricardo, it turns out, wasn’t the only one in the family with multiple identities…but more on that in my next post, Underground in Miami.