Passing of the Baton

I remember the day I told my mother I wanted to write a book about our family history. We were sitting on her gray and white-striped couch in Providence, Rhode Island, the day after Christmas, 2005.

“I’ve decided I’d like to write a book about how Papa and his siblings survived the Holocaust,” I said. I held my breath, unsure of how my mother would respond. (Try telling the average person you’re thinking about writing a book and chances are they’ll look at you with eyebrows raised and offer something to the extent of, “sounds exciting…but don’t quit your day job.”) I’ll never forget the way my mom’s big, hazel eyes lit up.

“I think that’s a great idea!” she said, glancing at a photo of her father she’d set on the cabinet of our upright piano. “You don’t hear stories like ours very often…well, really at all,” she added, and then sprung up off the couch, returning a minute later carrying a black three-ringed binder. “Here,” she said, handing it to me. 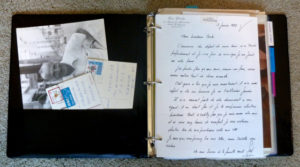 My mother’s binder: a collection of photos, letters, postcards, and newspaper clippings

She’d put the binder together after my grandfather died in 1993. It was stuffed with photos, letters, postcards, and newspaper clippings. “I’ve always wanted to do the same—research it, write it all down—just never had the time. This,” she said, patting the binder resting on my lap, “is as far as I’ve gotten.”

And just like that, the baton was passed, the responsibility mine—it was up to me now to cross the finish line. I sensed a hint of relief from behind my mother’s smile and for a second I was envious.

I took the binder home with me to Seattle, where it lived on a bookshelf in my office while I toyed with the idea of writing the book. The thought of it scared the hell out of me. It would entail trips to Europe, Brazil, Israel, and all over the States for interviews, hours of sifting through old letters and photos, not to mention the highly daunting task of actually putting words to paper. While I knew it was something I needed to do, it was too daunting a project to tackle right away. For two years I kept up my day job, the book idea germinating somewhere in the back of my mind, until finally I couldn’t ignore it any longer. 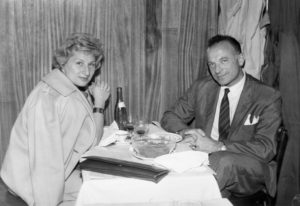 A photo I found in the binder of my grandfather (who remained very close with his siblings after the war), taken in the late 50s/early 60s with his younger sister, Halina