Looking Back: Surviving the Holocaust, Through the Eyes of a Three-Year-Old

In February of ’08 I flew to Paris to interview two relatives: Felicia and Anna (daughters of Mila and Halina, my grandfather’s two sisters). Equipped with a digital voice recorder and an empty moleskin notebook (and a flutter in my stomach that kept me wide awake for the duration of my ten-hour overnight journey), February 11, 2008 will forever stand out to me as the day this project finally felt, well, real. 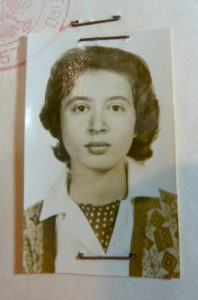 A photo taken of Felicia at age eighteen, found at the National Archives in Rio de Janeiro, attached to her naturalization records

My interview with Felicia took place in her apartment in the 16th Arrondissement–I couldn’t help but wonder as we sat down at her kitchen table if, as a child growing up in war-torn Poland, she ever imagined that one day she’d live within a stone’s throw of the Eiffel Tower.

Felicia was less than a year old at the outbreak of WWII, six years old on V-E Day. I assumed her memories, from the early years especially, would be fuzzy at best. Turns out I was wrong.

To this day, I’m still amazed at the lucidity with which Felicia was able to recall the details of her wartime experiences: the long coat her mother sewed as a part of a scheme to escape the ghetto…the thunderous stomp of German boots patrolling just inches from her hiding spot at a uniform factory where her mother worked…the stench of peroxide the nuns at the Catholic convent used to bleach her auburn hair blond, so she’d fit in with the other children. 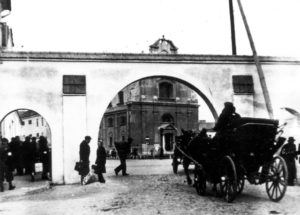 The entrance to the Radom ghetto. Mila’s elaborate plan of escape involved dressing like a German and slipping through these gates, with Felicia in tow.

Reliving her childhood memories wasn’t easy for Felicia–I’m thankful she was willing to discuss them at all. Her account not only helped lay the groundwork for what would eventually become an outline for my book, but also gave me the chance to reflect on my own (vastly opposite) childhood. Suddenly the “challenges” I remember facing as a toddler–helping my dad shovel snow off our porch, traversing the monkey bars at the playground, learning how to tie a shoelace–were no longer challenges at all, but blessings. 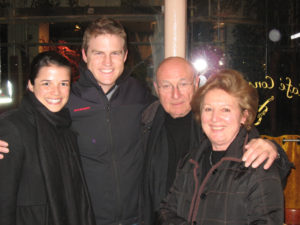 When our interview was over, Robert and I headed out for a dinner of moules frites and bouillabaisse at a neighborhood bistro with Felicia and her husband, Louis

*More on my interview with Anna in my next post