Thirty-Two Relatives Under One Roof: a Raucous-Turned-Revelational Family Reunion

In July of 2000, the summer after I graduated from the University of Virginia, my mother organized a Kurc family reunion at our house on Martha’s Vineyard. She invited thirty-two relatives (many of whom she hadn’t seen in over twenty years), and to her surprise, all thirty-two RSVPed, “Of course we’ll be there!” We rented a house down the street from ours and asked the neighbors next door if they could spare a bedroom or two for the week. When my mother told me I’d be sharing a room with a cousin I’d never met, I was (admittedly) a bit apprehensive.

My parents and I spent the first two days of our reunion shuttling family from the island’s minuscule airport and ferry dock to our house in West Tisbury. Kurcs rolled in from everywhere—Miami, Oakland, Seattle, Chicago, and from as far away as Paris, Rio, Tel Aviv and São Paulo. I’ll never forget standing in the kitchen on our first night together, enveloped in the smell of my mother’s lasagna and a cacophony of laughter and tri-lingual conversation, trying to figure out where, exactly, I fit in. Everyone looked so…different. Some were dark-skinned, others light, some blue-eyed, others brown-eyed, like me. Hair color ran the spectrum from black like my mother’s to blond to fiery red. It was strange, I remember thinking, to be surrounded by so many people who looked and talked nothing like me, but who’d been introduced hours earlier as family. 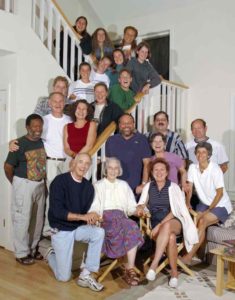 The Vineyard graced us with a week of rain during our reunion, which translated to a lot of indoor together time. But what could have been an awkward, claustrophobic kind of week turned out to be exactly the opposite. My cousins were fun and funny, curious, and interesting. By day we’d sprawl over the living room sofas, comparing hobbies and tastes in music and movies (how was it that my Brazilian and French cousins were better versed in American pop-culture than I?); we’d hit the town for minigolf or burgers, and when the sun peeked through the clouds, we’d park ourselves on the beach or play volleyball in the front yard. By night, we’d help set the table (tableS, actually—it took three pushed together to accommodate the whole family) as our parents hummed to jazz CDs—there was always music playing, it seemed—preparing dinners ranging from all-American barbecue to traditional Brazilian feijoada. And then we’d sit down to feast.

After dinner, my mother’s generation would gather on the back porch, where they’d pull a bunch of chairs around in a circle and talk, often for hours. One night, I wandered outside, settled down on a picnic bench next to my aunt Kath, and listened. As darkness fell, my mother lit some candles and uncorked a couple of bottles of wine. Languages alternated mid-sentence between English, French, and Portuguese and it was challenging, at first keeping up with the chatter. But I managed, and when conversation shifted to my grandfather and then to the war, I leaned in closer. Little by little, I began to piece together a part of my family’s past which, until that day, I had no idea existed.