A New Life for We Were the Lucky Ones

So I’ve got some big news. I’ll get right to it, and promise to fill you in on summer book happenings soon–but this news, IMHO, takes the cake: Thomas Kail, dear friend and director extraordinaire, has optioned We Were the Lucky Ones for the screen!! His production company, Old 320 Sycamore, aims to adapt the story into a limited series for television. It’s been a day since the news went live, and yet here I am, still reeling as I write this. 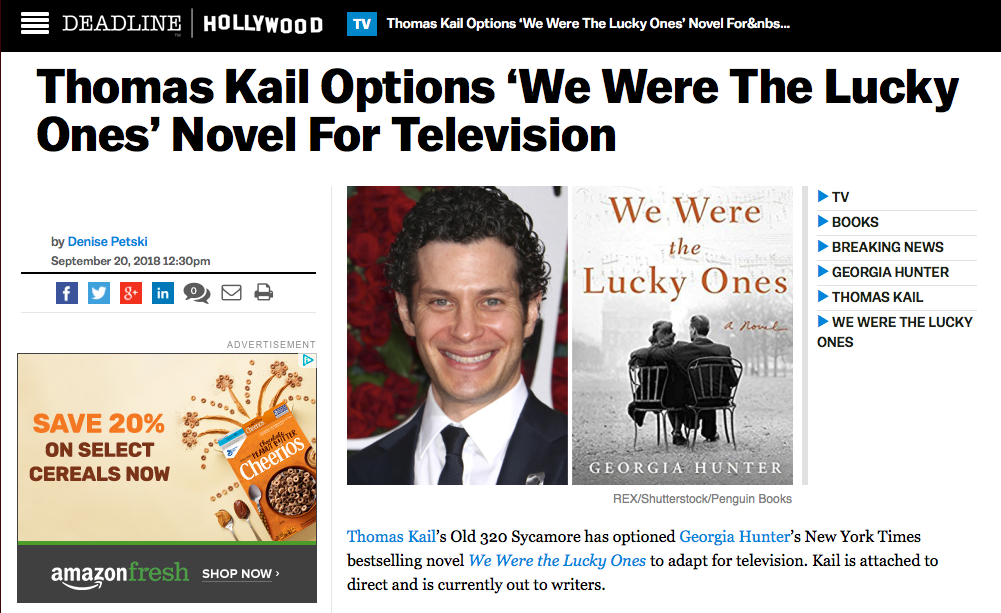 In the last year and a half, people have often asked whether We Were the Lucky Ones has been optioned for TV or film. Until now, it’s been somewhat of a relief to say no, not yet. I love that my family’s story has found its way into the hearts of so many readers, but the idea of it landing in the wrong producer’s hands has felt terrifying. What if the story is exploited? What if it’s taken it in a direction I’m not comfortable with?

I’ve known Tommy, a childhood friend of my husband Robert’s, for 20 years. From his hip-hop workshop in a church basement to the off-Broadway and then Broadway productions of In the Heights and Hamilton, Robert and I have seen everything Tommy has directed (both on stage and on screen). With each show, we’re bowled over by his ability to bring plot and characters to life in a way that feels utterly authentic and relatable–no matter the subject, or the era.

So when Tommy brought up the possibility of adapting my book, suddenly the idea of We Were the Lucky Ones coming to life on a screen, under his direction, felt right. Not just right, but goosebumps-head-to-toe-thrilling! And now it’s official. I know there’s a long road ahead (finding the perfect screenwriter is the first step, I’m told), but I have the dizzying sensation that this could be the start of something big. Something wonderful.

I couldn’t be more excited to share this news with you all–especially with those who have been along for the ride since the very beginning, when I set off for my first interview (in 2008!) with no real sense of what lay ahead, just the belief that unearthing and recording my family’s history was something I needed to do.

Thank you all for sticking with me, especially my family, for the outpouring of love and support over the many (many!) years. Thank you to my father, for telling me over and over again that We Were the Lucky Ones deserved a second life on the screen–he adored Tommy and I can’t stop thinking about how very proud this would make him! Thanks to my mother, my wing-woman since Day 1 on this project, and to Robert for the never-ending encouragement. Thank you to my editor Sarah Stein and my agent Brettne Bloom for the TLC that went into ushering We Were the Lucky Ones into the world, to Michelle Weiner at CAA, to Shannon Twomey and the team at Penguin, and to Kate Sullivan at Old 320 Sycamore for the help catalyzing this next endeavor.

And thank you, Tommy, for believing in this story as much as I do. What an honor it will be, to see your signature touch on something that means so very much to me.