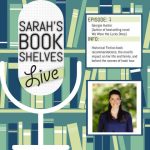 A new podcast on the literary website Sarah’s Book Shelves launched on January 2, 2019 with an interview with Georgia about We Were the Lucky Ones. The conversation takes a look behind the scenes at Georgia’s research, favorite books, book tour experiences, and even a hint about her work in progress.

Virtual Retrospective in Poland on December 11

The Resursy Cultural Center of Radom, Poland, announced that Georgia will be interviewed online at a Retrospective featuring her book, We Were the Lucky Ones, the story of the lives of her Radom-based grandfather and his family during World War II. Sponsored by Resursy, Retrospectives are interactive events held monthly to explore the history of Radom and to share insights, memories and artifacts relating to the city.

During the December Retrospective, visitors will be able to buy the Polish edition of “We Were the Lucky Ones” (“My Mieliśmy Szczęście”), much of which takes place in Radom. Georgia is grateful to Resursy’s Jakub Micek, who contributed to the narrative by assisting with fact finding about the history of Radom.

The event will also feature a vocalist performing “List” (“The Letter”), a song written by Addy Kurc when he lived in Radom. The original recording by Viera Gran may be heard here.

What Should I Read Next?

Georgia’s conversation with Anne Bogel for her “What Should I Read Next?” podcast is live on the Modern Mrs. Darcy literary website. The interview, dubbed “The stories behind the stories we love to read,” gives listeners an inside scoop on Georgia’s process in conceiving, researching, and writing We Were the Lucky Ones, as well as some  current suggestions on what to read next.

“Great news, historical fiction readers,” announced BookBub. “A We Were the Lucky Ones TV show is now officially in the works!” Thomas Kail, the Tony-Award-winning director of Hamilton, is set to direct. “I am overjoyed to be partnering with [Georgia] to create a television version of this story that honors this incredible book,” Kail said. Hunter’s response: “For [Tommy] to put his signature touch on my family’s story is an honor and a thrill.” Read the full story here.

One Book One County Festival

Each year, Thomas County, GA, selects a book to read as an entire community in a “One Book One County” celebration, which engages people of all ages with cultural and educational activities. The 2018 selection is We Were the Lucky Ones and will feature an author presentation on October 4. The Bookshelf, a “One Book” sponsor, talked with the author for its podcast, From the Front Porch. (Interview starts about 3 minutes in.)

We Were the Lucky Ones optioned for TV

As soon as plans for a We Were the Lucky Ones TV series were announced, Jewish Journal’s Hollywood Schmooze column featured news of two Holocaust-themed books – We Were the Lucky One is one of them – to be adapted for the screen. The article notes, “Old 320 Sycamore has optioned Georgia Hunter’s novel, which was inspired by her grandfather’s wartime experiences.”

We Were the Lucky Ones is the 2018 Connecticut Book Award winner in the fiction category. The honor was announced at a ceremony on October 14, 2018, at which Okey Ndibe, 2017 winner in non-fiction, gave a moving keynote speech.

“Across the Miles and the Years”

The Fall edition of Virginia features a story on alumna Georgia Hunter and We Were the Lucky Ones. The article posits that Georgia’s college study of behavioral psychology helped with gathering of oral histories for the book. “She’d learned that people’s actions provide the clearest window into who they are. So instead of asking, ‘What kind of person was your father?’ she’d say, ‘Tell me his favorite joke.’ Or, ‘Tell me what annoyed you about him.'” This approach helped her “collect the compelling details that she could then imagine into conversations among her characters, bringing them to life on the page.” You can read the full article here.

“You will fall head first into this masterpiece”

“A thrilling novel is hard to put down,” says Jessica Vainer of The Baltimore Post-Examiner of her “top book picks.” She singles out five novels for which to “buckle up for an adventurous ride to depths of breathlessness,” including We Were the Lucky Ones, about which she promises, “…you will fall head first into this masterpiece and never come out.”

After its debut in January, We Were the Lucky Ones spent over four months on the…

We Were the Lucky Ones is selected by Harpers Bazaar as one of 14 Books You Need to Read in February…”a tale of resilience and commitment to one another amidst the direst of obstacles.”

“Love in the face of global adversity? It couldn’t be more timely.” –Glamour magazine, on We Were the Lucky Ones